Peter Ellenshaw began his career in the film industry by working for the renowned British portrait artist and visual effects pioneer, W. Percy Day, O.B.E. This collaboration lasted until World War II, when Ellenshaw enlisted as a pilot in the Royal Air Force.

After the war, Ellenshaw began a life-long association with Walt Disney, working as a matte painter on Disney's live action films. Ellenshaw would paint background effects on glass which would be filmed together with live actors. This technique created the illusion that the actors were actually in the environments depicted in Ellenshaw's paintings. Cityscapes, countryside scenes, buildings, oceans… any background or effect could be created by Ellenshaw's masterful hand.

Peter Ellenshaw received five Academy Award nominations for his work with Walt Disney, winning the Oscar for his stunning recreation of Edwardian London in Mary Poppins.

Aside from his work in film, Peter Ellenshaw has spent decades painting beautiful depictions of dramatic landscapes and seascapes. Well known for his masterful paintings of sailing ships and ocean scenes, he has also created breathtaking images of California's deserts, Ireland's lush countryside, New York's spectacular skyline, and many more dramatic vistas.

The art of Peter Ellenshaw is represented in both public and private collections worldwide. Ellenshaw has received numerous honors and retrospectives including those from the American Film Institute, the Museum of Modern Art in New York, the Film Institute of Chicago, the Academy of Motion Picture Arts and Sciences, and the Disney Legends Awards.

Working again with The Walt Disney Company, Peter Ellenshaw has created some wonderful paintings featuring Winnie the Pooh, The Seven Dwarfs, Mary Poppins and other classic characters in the enchanting scenes he is so well known for. Animation Connection is proud to offer the beautiful animation art of Peter Ellenshaw. 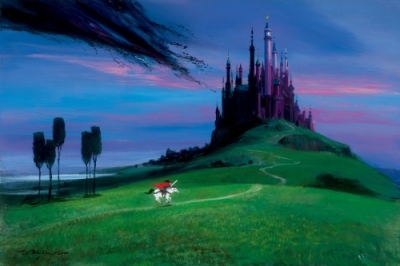