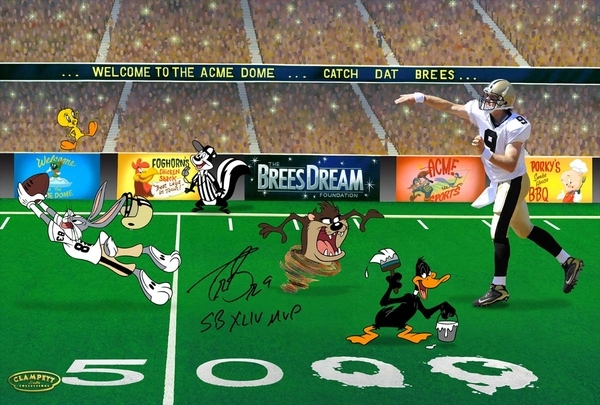 Drewâ€™s amazing 2009/2010 Super Bowl XLIV Championship and MVP title season followed the release of this tribute limited edition, and Warner Bros. has the exclusive Encore release that includes Drewâ€™s addition of his â€œSB XLIV MVPâ€ title. Drew is the first football player to be featured in a Warner Bros. animated limited edition to raise funds, making him a part of American animation art history. Drew Brees and the famous Warner Bros. Looney Tunes characters commemorate the second time in NFL history that a quarterback eclipsed the 5,000 yard passing threshold during the 2008/2009 NFL season. The iconic Bugs Bunny, a.k.a. Billy Miller (#83), is the one to â€œcatch dat Breesâ€ for this historic pass. If there ever was a collection of sports fans gone wild, it would be the Looney Tunes crew. Of course, home field advantage comes to Bugs and The Gang within the Acme Dome, where all the characters are involved with the game; from Tweety riding the â€œBreesâ€ to Daffy pressure rushing the turf with a white paintbrush that advances mid-field to the 5,000th yard (more in celebration of Breesâ€™ passing yardage than Daffyâ€™s attempt at confusing the opponents). Even referee Pepe Le Pew is in on the act, though itâ€™s known one way or the other, heâ€™ll stink up a call or two while Marvin Martian, Foghorn Leghorn, Wile E. Coyote and Porky advertise their wares along side Drewâ€™s Foundation. The original character animation for this edition was created by noted WB Animation Director, Darrell Van Citters. The master inking for the hand-painted cels was produced by Laurie Dindis. Famed animation artist, Kirk Mueller, did the character illustration and designs for the advertising billboards. The background painting was created by Dennis Durrell which was then reproduced with the fine art giclee process. Alex Costa did additional digital design work leading to this animation treasure, a collaboration of nine different designers, character artists and illustrators. Finally the cel was numbered and hand-signed and titled by Drew Brees. 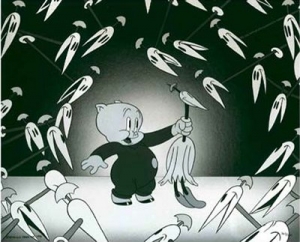 Last of the Dodos 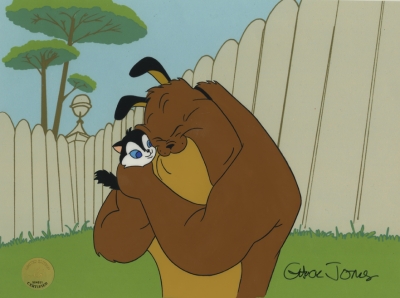